I had a Asus Xonar dg sound card from the money I had when my wife died.  I have had that for quite some time.  i finally started having problems with that card not working under windows 10 because the drivers were pushing 5 years old and the windows driver architecture had quite a few changes over that time.  I decided that i liked the Xonar series so much I upgrade to the Xonar AE pci-e 1x card.  The motherboard I was using had only 1 pci-e 1x slot(as it has 3 pci slots for legacy hardware).  It turns out that placement was bad as on one side is the rear of my graphics cards and the other side was the exhaust of the cpu fan.  I start having problems with the sound dropping completely…no sound would work.  I had to reboot the machine to get it working.  It didn’t take long to figure out it was an overheating problem.  Recently both as a fix and an experiment, I purchase another motherboard with NO pci slots(see below this paragraph).  However it does have multiple pci-e 16x slots and pci-e 1x slots.  The problem with this motherboard is the single pci-e 1x slot is so close to the primary graphics slot it would starve the graphics card of air and cause a different overheating issue.  Knowing this when I bought the board i was going to try ot use the second pci-e x16 slot as a regular card slot.  Well as the picture shows the sound card is running perfectly in that second big slot..and now the air being drawn into the graphics card now cools the backside of the sound card.  Problem solved right?  It wasn’t that simple…. 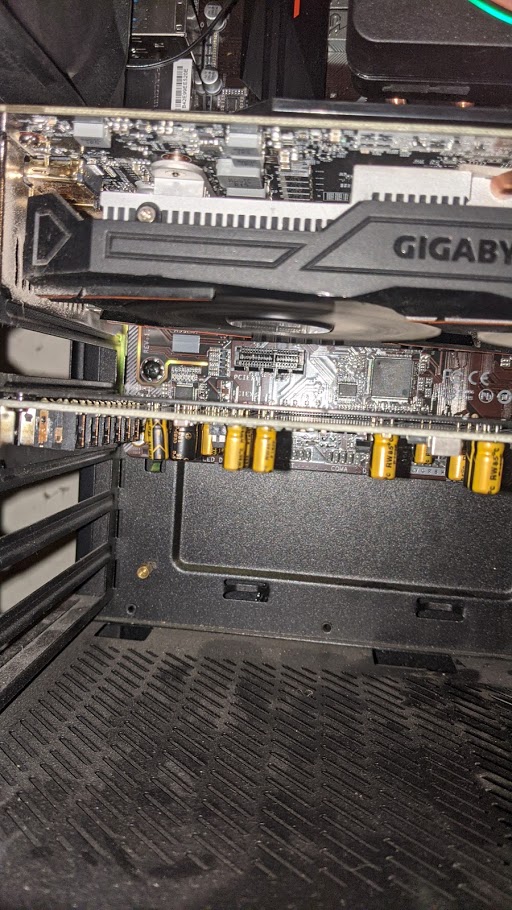 The next time i fired up my games and my audio chat server client…it lasted quite a big longer..until the audio chat system again went silent.  The games worked fine..but the audio chat system fell over. This time I had to restart once again for the chat server client to work again.  WTF?!?!?!?  I then started hunting for the problem.  I found there was a driver update..AHA!  i installed the new drivers.  Nope didn’t fix it.  I paved my tower and started over with the newest software.(along with windows 20h2 which caused a MESS of other issues including the destruction of Gamecache..i will detail that is a post on etc-md.com but due to how my storage is designed it wasn’t a true emergency).  i paved the tower again.stuck with win10 1909 and STILL had the audio problem.  i finally pulled the card out of the system and used the onboard audio..ick ick cik.  After a couple of weeks I found a post on an obscure blog where somebody posted about a similar problem..how did he fix it?  Force the sound card back to the original CD settings…which sounds good..but nothing like I had my card set to..but TONS better than the onboard audio.  i did that..and then embarked on a day long gaming session with some friends..with zero problems.  So now..when I am going to be using the chat server i run I have to downgrade the cards output to basic cd quality…once I turn it off I put the output back to studio quality or above…  i am going to notify teamspeak about this and hopefully thy can fix their client..:)

*UPDATE*  There’s a bit more I figured out:

At the same time as this I had been working on a project for my church and I needed to see if a non graphics card would run in the second gpu slot on a modern motherboard. i was not willing to risk my small church’s limited funds..so of course i risked mine. I purchase a new motherboard that now has the smaller slot underneath the graphics card. Now the air being drawn in to cool the graphics card goes across the sound card first and cools the sound card. That’s much better. I am typing this with Jean-Michele Jarre going..on my xonar AE..placed inside the second graphics slot and working fine. TWO birds..one stone! That weekend I fired up my games and began playing with my friends..and this time teamspeak dropped. The game played on and the system went on..but teampseak was not happy. It took a bit but i finally figured out the issue. Standard cd quality is at one particular sampling frequency and bitrate. i like to run my card MUCH higher than this. Teamspeak however cannot handle this and so it just gives up. I found out on my new AE that for the headphone port..I can set the audio quality to standard cd quality..which makes teamspeak happy. Once I switch to my speakers, the card is set to use the much higher sound quality settings. So far it’s been a couple of weeks and no more system lockups or Teamspeak issues..:)