The Trump Derangement Syndrome has gotten to the point that anything in the media that comes out I hold off on before I post.  I would say about 90% of the time if it is anti-conservative(not cuckservative), anti-trump it’s bullshit.

The instant this Roy Moore stuff started coming out I was highly suspicious.  Back on November 15th Karl Denniger called this story for what it was..an obvious forgery and therefore a total falsehood.  I have included Karl’s post below to make sure it doesn’t disappear due to his site expiring posts from time to time):

You Can’t Possibly Be Serious

Jesus, it’s that obvious and CNN ran this crap?

Yes, including Gloria Allred.  The yearbook is an obvious forgery and she peddled it on national television; that needs to be good for disbarment and prosecution.

The original tweet from CNN can still be looked at.  We’ll see how long it is before they try to take it down.  (Update: It appears one of Getty’s photographers shot the original photo; it’s been linked in the comments, and I checked it.  It’s pretty-clearly the image CNN used and it was also clearly shot in color as it includes portions of the people holding it in the picture….)

I took the image on the right side of their tweet, brought it into Photoshop and increased the size.

I will swear under oath that I did nothing to tamper with the color or tone and in fact did nothing other than increasing its zoom level to 400% because it would be impossible to tamper with the image at said greatly enhanced zoom level without causing visible artifacts in the background and periphery of the letters.  There is also a gradient in the paper caused by a B&W photo being in part of the area where the signature is, which again will cause visible artifacts if I were to try to tamper with it.  In other words I did this to add irrefutable proof that I did not in any way tamper with the image itself.  I also saved the extract from the tweet as a “PNG” which is lossless from my desktop to yours; no compression so there are no artifacts added in my process either; whatever CNN put forward, that’s what I (and you) have. 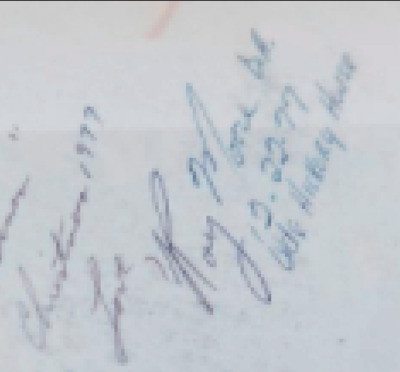 Those are clearly different inks for everything after the first name.

Was the original signature Roy or was it Ray?

Whatever it was, someone added “Moore DA”, the date and “Olde Hickory House” in a different ink color.

By the way, the claimant says that Moore knew she had a boyfriend “and offered to give her a ride home” when he assaulted her.  Was the boyfriend’s name RAY?

This must be criminally investigated right ****ing now as attempted federal election tampering.  Jeff Sessions, you claim to be “for the rule of law”, let’s see a search warrant for that yearbook to perform forensic testing of the ink, and if the latter part of the “signature” is not 40 years old indictments must issue right now for everyone involved in this crap or you are a lying, sniveling sack of ****.

A bit of truly independent, critical thinking and this is an obvious forgery..isn’t that a crime?  Where are the handcuffs?  I ask that question because now the accuser has admitted to forgery herself.  Karl Denniger on November 14th voiced suspicions about this as well.  Guess what network broke this “story”?  You guessed it..the fakenews network..CNN.